Each year QGOA has a quilt made by members of the Guild. The Guild sells tickets for a chance to win this quilt, with funds raised benefiting QGOA and a local charity.

Tickets are now on sale for $1 each, or 6 for $5. You can buy tickets via mail by sending a check to QGOA at PO Box 13232, Arlington, TX 76094. You may also purchase tickets from any Quilters’ Guild of Arlington member, or buy them online at the link below. The drawing will be held December 8, 2020 and you need not be present to win. 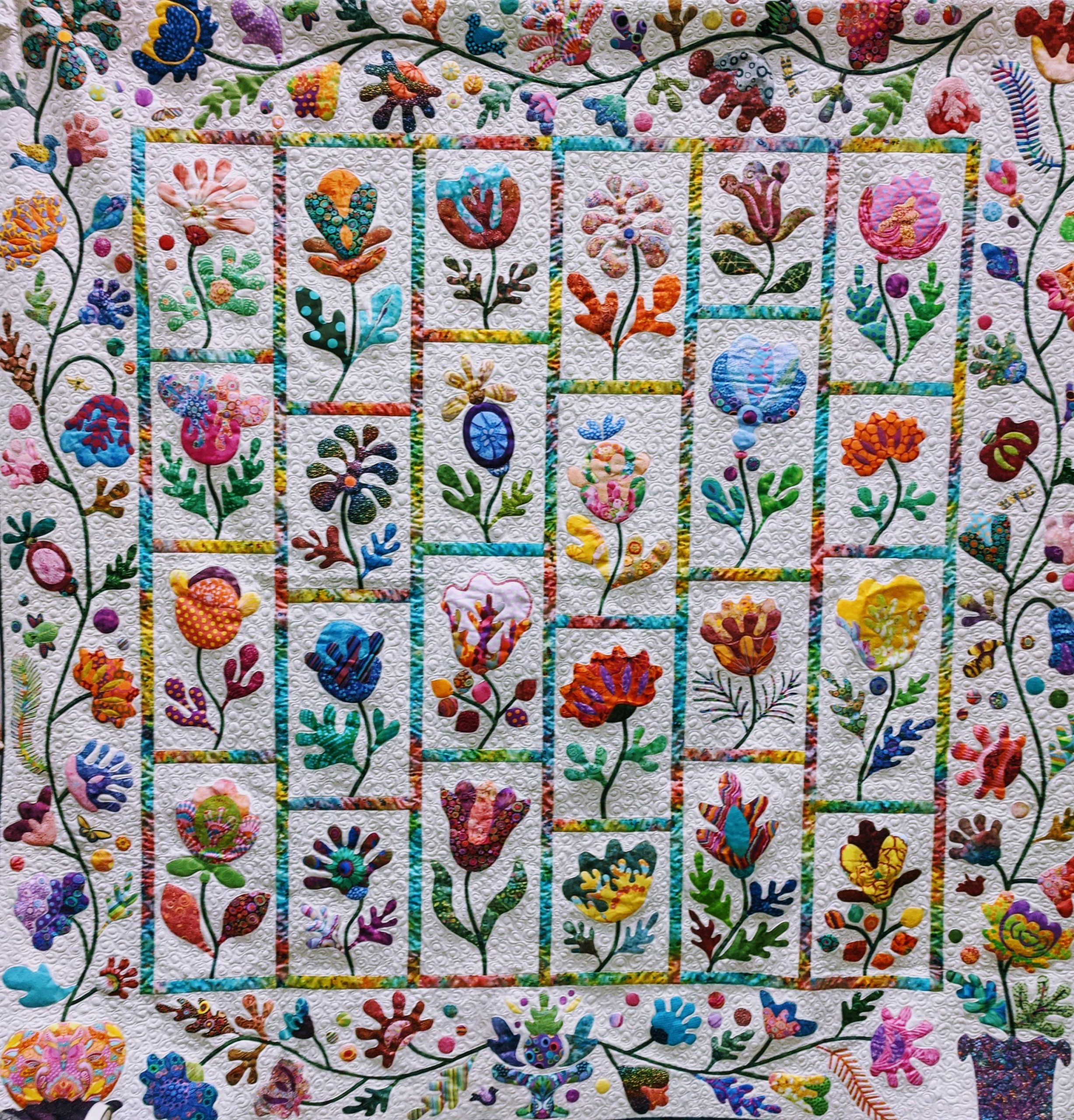 The quilt was inspired by  a Kim McLean pattern, chosen for its beautiful flowers and colors found in nature. The selected fabrics represent the many different talents and colorful personalities in our guild, all coming together to create a beautiful and harmonious blend. The quilt was made by Phyllis Borton, Jill Matyastik, Janice Mowery, and quilted by Nancy Spell.

2019 Donation Quilt, “Bunnies in the Garden” 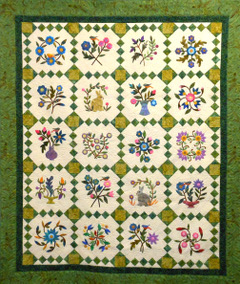 This 79″ X 92″ quilt was designed by Nancy Spell, inspired by two blocks originally designed by Edyta Sitar. It was pieced by members of Friendship Stitchers and quilted by Sabina Thompson.

The quilt was won by a QGOA member, Claudia Klipp! 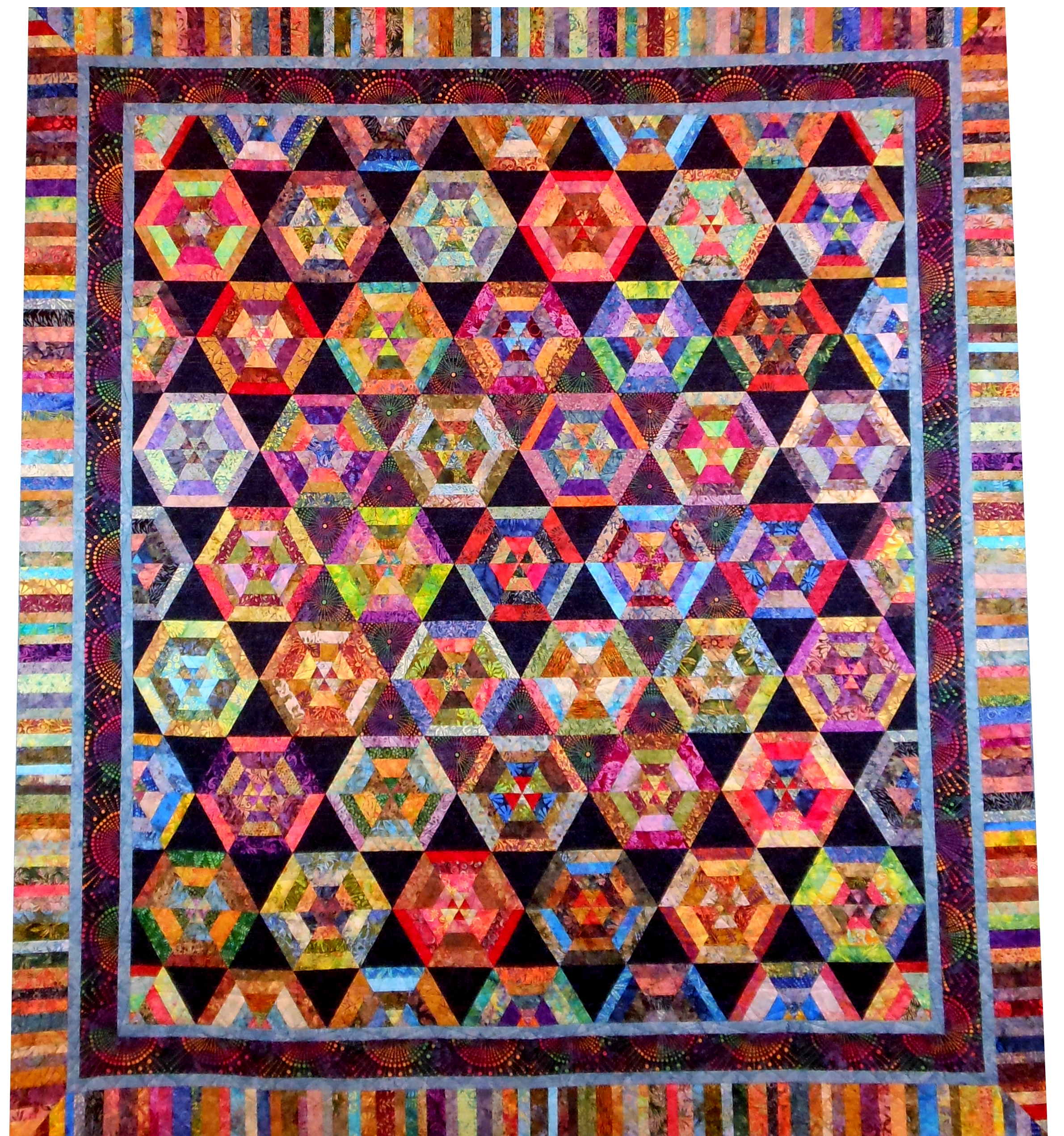 “Webs of Color” was designed by Annis Clapp. Annis was inspired by a Spider Web work-in-progress by Gyleen Fitzgerald. It was created by the Sew N’ Sews stitch group and quilted by Veronica Mowery.

The quilt was won by a QGOA member, Susan FitzGerald! The Etcetera Art Quilt Group challenged themselves to create a quilted work of art using an improvisational style. Each member created “blocks” to be sliced and diced and reassembled into a pleasing arrangement. Members paired off and developed layouts independently and the group voted unanimously on this design. The result is a stunning piece with bold colors and organic movement. Donna Akins did the quilting.

Ginny Miller’s inspiration was based on a quilt featured in a quilt magazine and shown at the Dallas Quilt Show many years ago. The blocks were made by The Piecemakers stitch group and pieced together by Ginny Miller and Ann Siden. Sabina Thompson did the quilting.

Nancy Spell redesigned a Kim McLean pattern, pieced and quilted by Nancy Spell with hand applique help from the Friendship Stitchers. A portion of the raised funds was donated to SafeHaven.

Designed, pieced and quilted by Annis Clapp. The Sew-N-Sews stitch group made the paper pieced batik sunburst blocks and guild members made the connecting blocks. A portion of the raised funds was donated to SafeHaven.

Irish Chain was designed by Del Jeanne Mathews, appliqué blocks by Piece O’ Cake Designs made by the Sew-N-Sews stitch group, and quilted by Nancy Spell. A portion of the raised funds was donated to SafeHaven.

Designed and pieced by Patricia Eckstrom and blocks made by guild members using some of Patricia’s mother’s fabrics. A portion of the proceeds was donated to SafeHaven.

Designed by Libby McDuffie, blocks made by guild members and quilted by Sabina Thompson. A portion of the proceeds was donated to SafeHaven.

Designed and pieced by Pamela Pape and quilted by Donna Akins. A portion of the proceeds was donated to Mission Arlington.

Designed by Jolene Mershon, pieced by guild members, and quilted by Sabina Thompson. A portion of the proceeds was donated to Mission Arlington.

The pattern “Double X” was taken from a quilt magazine. The blocks were made by The Piecemakers stitch group, assembled by Jo Ann Ubanks and quilted by Melba Drennan.

If you have any information about past donation quilts, contact Susan FitzGerald.